Paper Arts at the CLA

As we approach a year of the pandemic, it’s time to move on from that sourdough starter. If you haven’t mastered it yet, you never will. If you are looking at your post-Valentine’s Day crafting detritus and considering starting your own cottage industry (No? Just me then?), perhaps you are also looking for some inspiration. I invite you to take a look at the variety of paper arts that can be found in the Congregational Library’s collections. That’s where I usually go, anyway.

The Congregational Library boasts material from the 15th through the 21st century. Below you can find examples and explanations of just a few of the most common examples of paper decoration on display. 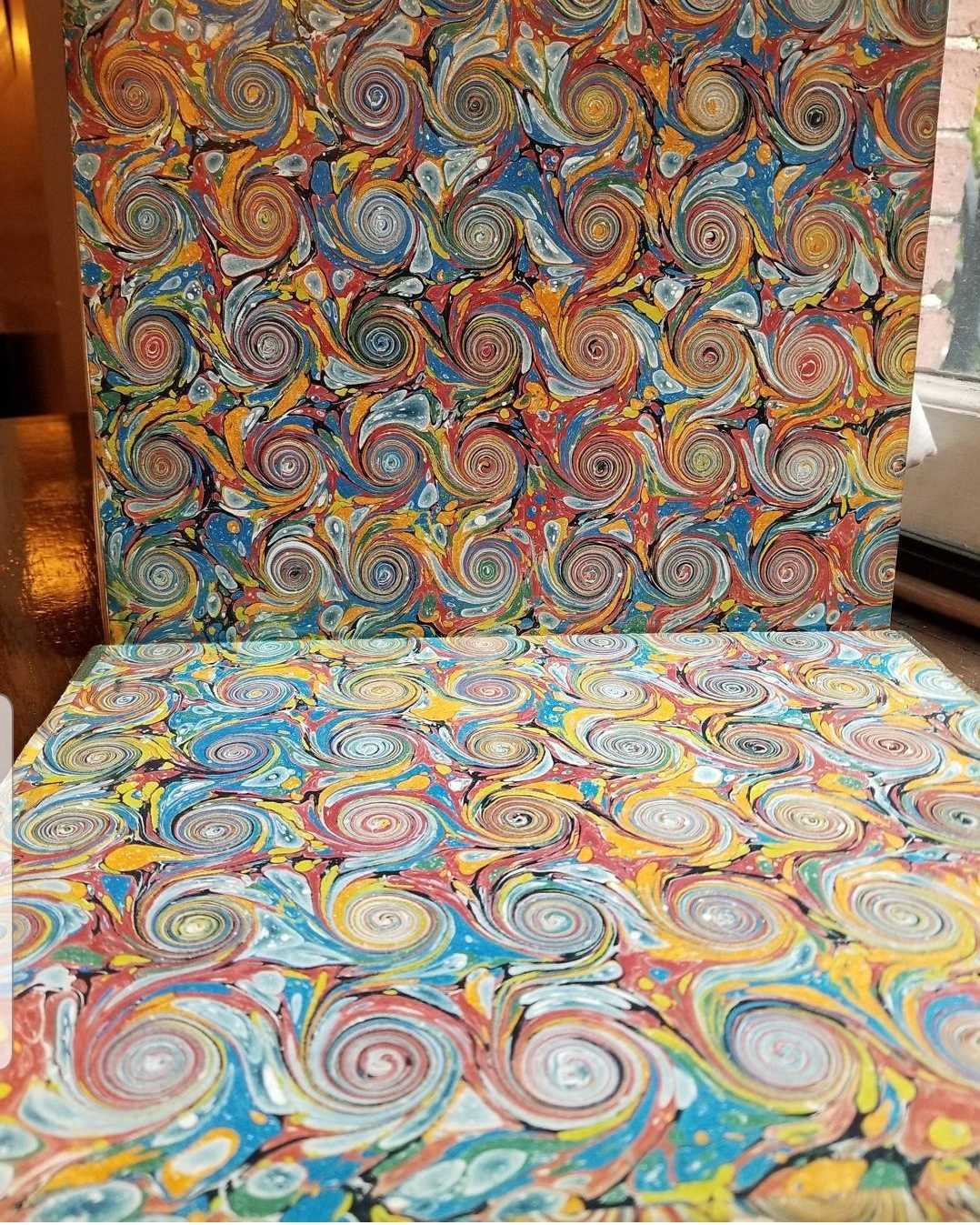 Marbled paper is by far the most common type of paper decoration found in our collections. In part, this is because a large portion of our collection dates to the 19th century when paper marbling was extremely popular. It comes in a variety of patterns and is used to adorn book covers, endpapers, and fore edges, line boxes, slipcases and trunks. It can also be used to decorate textiles

The earliest examples of paper marbling in European bookmaking come from the 15th century by way of Turkey where the art had been practiced much longer. There is a reference in a 10th century Chinese treatise on paper decoration that refers to “flowing sand notepaper” which describes a process that very closely resembles that of marbling, indicating its origins might be far older. Western marbling follows the Turkish process most closely where some form of sizing is added to water to make it viscous and pigment is floated on top. Ox-gall is added to the different pigments so they don’t mix. Designs are then drawn by adding different colors and blowing or dragging implements through the pigments to create patterns and images. Each design will be unique, but there are a number of common styles that artists return to, such as the Snail shell pattern pictured above from the endpapers of an 1865 Report of the Centennial celebration in Pawtucket, RI. 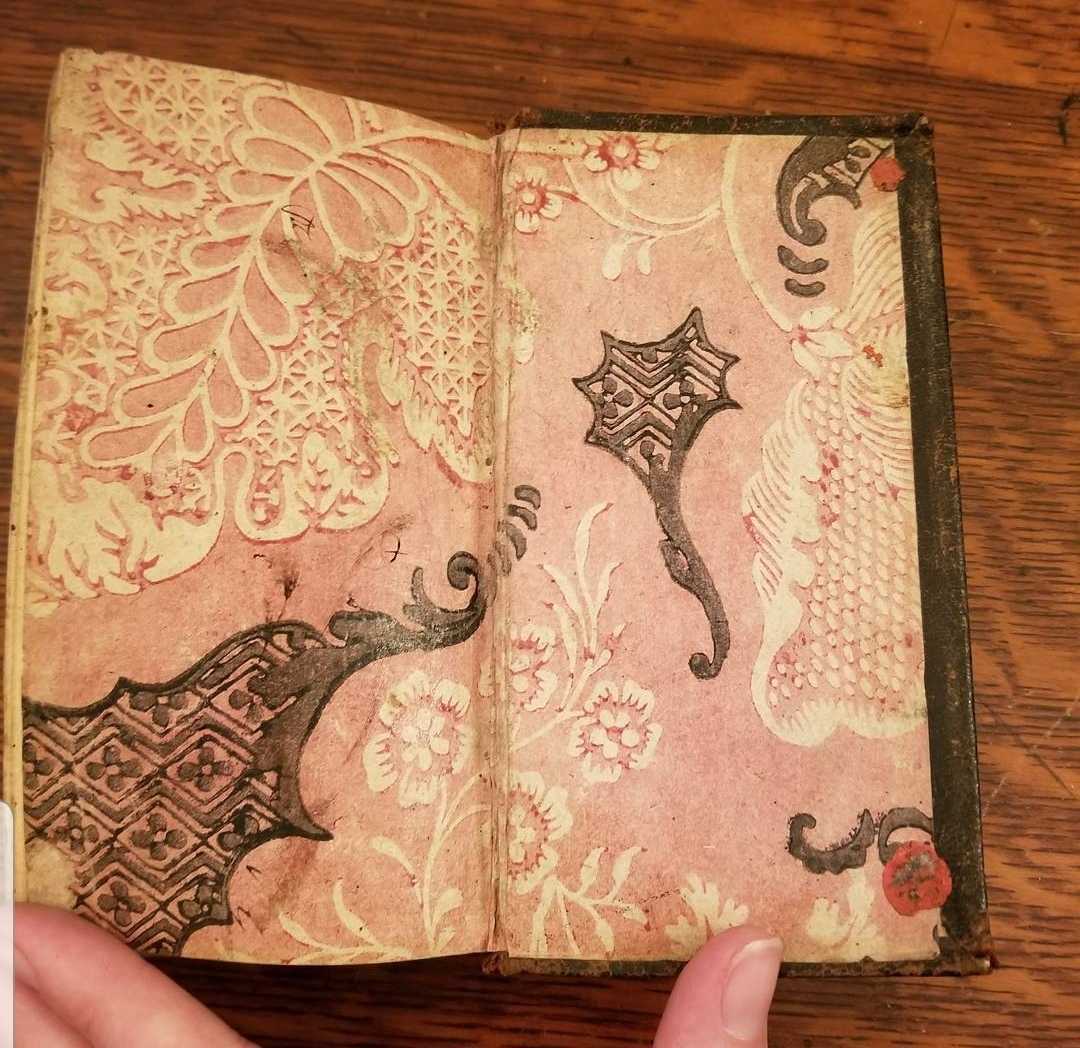 Before wallpaper was printed in rolls, it came in individual printed sheets called “dominos”. Each sheet was hand-colored using stencils. As you can imagine this process was very time consuming and very expensive. While Domino papers were used to line the walls of intimate rooms, they were also used to decorate the end papers of books and the lining of chests. Floral designs are very common.

This method of paper decoration makes only an occasional appearance in our collections for a few reasons. First, it was most popular in 18th century France, a time period and location that is not particularly well-represented in our collections. Second, the high cost both in terms of money and time of producing Domino papers mean that it would have been used sparingly and for particularly special items.

You can see an example from an edition of the New Testament printed in Zurich in 1708.

Paste papers are exactly what they sound like. Paste, with added pigment, is  painted on sturdy paper and designs or patterns are drawn or block printed into the paste, giving it a textured look. Making paste is a pretty simple enterprise: flour + water + some type of pigment. So the methods used to decorate paste papers display a wide range of skillsets. They can be simple or quite complex or somewhere in between. Most artists developed their own recipes for the perfect paste resulting in distinctive textures and appearances.

The example above, from the cover of a bound set of newspapers in Hawaiian, is fairly complex: a geometric pattern with additional floral designs stamped in.

Aside from the aesthetic appeal, these types of paper decoration tell us something about how the books that display them were viewed by those who produced and owned them. 19th century designs could be added by publishers or binders to make a ‘fancier’ or more attractive product. Examples from earlier periods may have been added by a book’s owner to decorate a particularly treasured possession, like the Domino papers in the French Bible. There are a number of conclusions we can draw, but beyond that, and more simply, coming across an unexpected example in the stacks is always a pleasant surprise.

While the staff of the CLA have been working from home, we have continued to remain engaged with our collections even while separated from them. These posts will highlight some of our less well-known collections. Please note that the collections highlighted are not available online unless otherwise noted.

Today I want to highlight the Roslindale, Boston, Highland Congregational Church records, 1869-2006, RG4824. The collection was donated to the library in 2007 and processed in 2009. 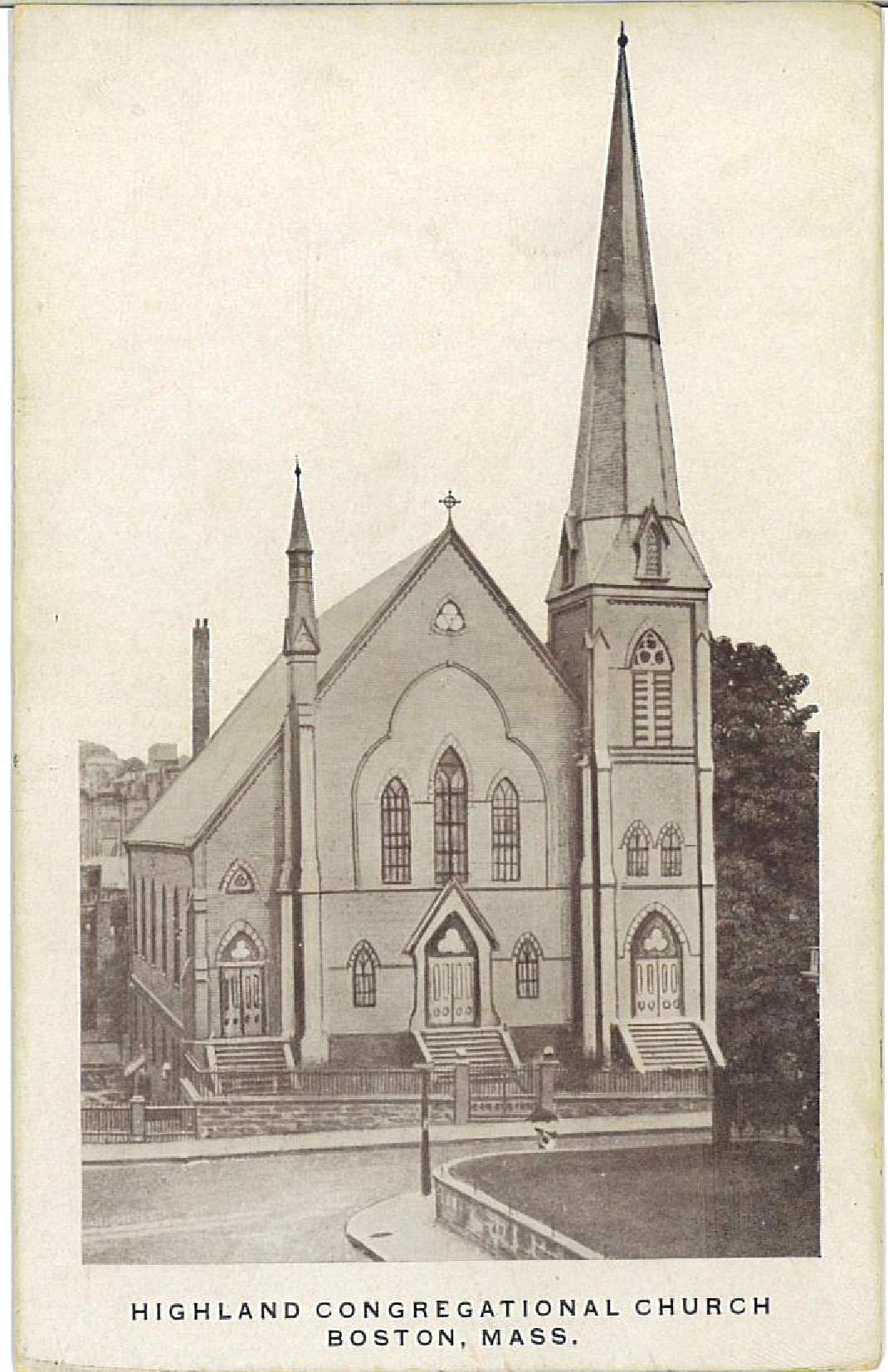 This collection is broken up into 6 separate series and is contained in 13 boxes, making it quite a large collection. The first series, Church Records, contains manuals, meeting minutes, annual reports, financial information, correspondences, and records related to the maintenance of the church. The records in this series only go up to the time right after the move to Trinity Lutheran Church. The second series, Members and Vital Statistics, focuses on births, marriages, deaths, Sunday School material, pastor’s notes, letters of transfers, and sermons. The third series, Auxiliary and Social Groups, focuses on a variety of clubs such as the Women’s Union, Union Mother’s Club, Women’s Missionary Club, Mount Holyoke Bible School and Sunday School. There is also a section of this series which focuses on the history of the church, including programs, activities, and other memorabilia. The fourth series focuses on the Ministers of the church, with a primary focus on Rev. William Arthur Rice sermons, life, and activities in clubs around Boston. The fifth series, newsletters, contains editions of “The Highland Light” between 1891 and 2000, with some gaps. The final series contains two Bibles, one of which is from the church’s opening in 1871. The Highland Congregational Church collection contains so much valuable information that stretches across such a long period of time that it is a treasure trove for researchers or curious individuals!

The legacy finding aid for this collection can be found HERE. If you have any interest in viewing this collection once the library reopens, or you have any other CLA related questions, do not hesitate to reach out to us at ref@14beacon.org. Stay safe and have a great day!