Bringing Primary Sources into the Classroom: The CLA's Role as a Producer of Digital Resources 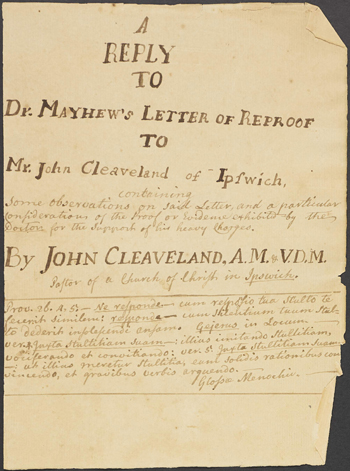 This past week, the staff of the CLA read and discussed the book Lies My Teacher Told Me by James W. Loewen. The book was an excellent read and the discussions thereafter were even better. Loewen’s breakdown of how high school history textbooks routinely and systematically present false, incomplete, or problematic versions of US history is damning and underscores why high schoolers regularly rate history as their least favorite subject. The fault does not lie with educators though. The need to “teach to the test” plays a huge part in the problem, and the outsized influence of certain textbook markets means publishers create textbooks with as little controversy as possible. The results are that teachers must teach the answers that appear in multichoice tests and that the textbooks that contain those answers rarely, if ever, present history as the chaotic mess that it really is. In the end we are left to forget that Woodrow Wilson was a proud racist whose destabilizing interventions in Latin America are still felt today and remember Helen Keller only for the uplifting story of her overcoming her dual disabilities and not for her socialist politics and support for eugenics. History is messy but you would never know from an AP US History course.

One of the things that struck me after reading Lies was the complete absence of primary and secondary sources from history textbooks. Sure, excerpts of primary sources, some comically inserted or distorted, might appear within textbooks, but they are rarely engaged with. The field of history is messy, and that mess all starts with primary sources. The best history assignment I was ever given was during my sophomore year of college in an early-US history course. We were given a packet of primary and early-secondary sources about the Boston Massacre and told “describe what happened during the Boston Massacre.” Of course, if you know anything about the Boston Massacre, you know that basically no sources corroborate one another, so the exercise was to piece together a plausible narrative based on the available sources. The Boston Massacre is a particularly messy example, but this is basically how all history is done. Except you would never know if by reading your history textbook.

In the past, it would never have been particularly feasible though for high schoolers to look at primary sources. Access the primary sources, especially in the yesteryears, was not exactly the most accessible due to problems of geography, money, and repository policies. But the internet has slowly, and steadily, been changing that. Digitization does not only provide access to researchers, but it also provides access to students, and creates opportunities that they might never have had before digitization and new ways of accessing those digital records. And we at the CLA are so proud to be a part of this story of increasing access through digitization. But digitization alone is not enough.

As I have talked in the past, access is more than simply publishing digital content to the web. It is necessary to properly describe digital content and provide both the tools necessary to search for content and find “like” content through linked data. But even that is not necessarily enough. It is important too the present digital content in ways that fit various audiences. For a seasoned researcher, examining digital records found via search results will likely be enough. But if we are to bring the CLA’s digital resources into the classroom, we must also be thinking about how to engage that audience. Complex searches alone are not enough.

Fortunately, there is one clear avenue of access when it comes to the classroom, and that is the teacher. One of the highlights of the CLA’s internal discussion of Lies was an acknowledgement that the CLA needs to be producing more curricula-like content. The excitement and activity surrounding the release of the “Plymouth’s Pilgrims” curriculum was palpable. We want to be doing more of that in the future! We want to create opportunities for students, educators, and interested parties to use our resources for educational purposes. While we alone might not be able to change how history is taught in high school, we do hope to play some part in the changing face of American education by encouraging educators to use our unique collection of digital resources. 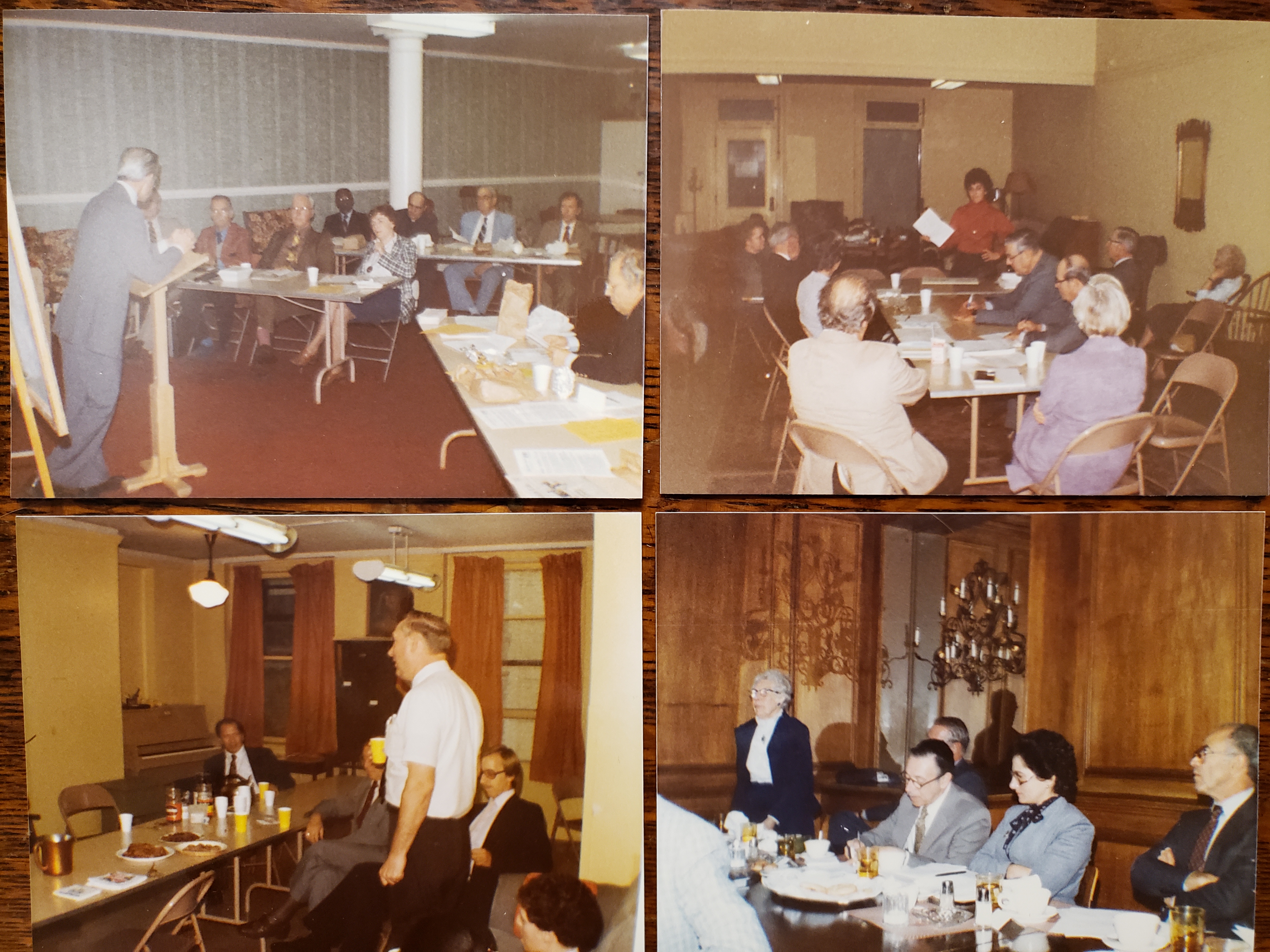 While the staff of the CLA have been working from home, we have continued to remain engaged with our collections even while separated from them. These posts will highlight some of our less well-known collections. Please note that the collections highlighted are not available online unless otherwise noted.

Today’s highlight will be RG5332, the Churchmen’s League records, 1940-1989. This collection found its way to the Congregational Library and Archives through a gift from Andover Newton Theological Seminary in 2017. The collection was processed by one of our archivists in 2018.

The Churchman’s League was an organization created for the purpose of promoting programs of study, research, education, legislation, and action. Their work was dedicated to raising the values of civic righteousness, social justice, moral decent and an overall better life for society. They used meetings, readings, discussions, and more to promote these goals. The organizationformed sometime around 1940 and by the 1960s was often referred to simply as “The League”. In 1963, the Churchman’s League expanded its original structure and opted to become three organizations wrapped into one. These new branches were the Massachusetts Temperance League, Lord’s Day League, and the Churchman’s League for Civic Welfare.

This collection is one worth highlighting because it showcases how an organization dedicated todirect change in society went about learning, spreading, and defending its message. The first series covers the wide topics of interest that the group sought to confront. These topics include blasphemy, alcoholism, court reform, prison reform, divorce, poverty and more. Each one of these topics has a dedicated folder which contains information about the League’s stance, efforts to increase awareness of their stance, and ways to turn the stances into concrete politicalaction. Another area of interest to the league was the status of religiosity, particularly in the 1960s and 1970s. In this area, the focus is less on action and more on learning and understanding the current realities of religion in the United States.

The next two series deal with the operations of the Churchman’s League from an organizational and financial sense. Beyond basic finances, the collection has contributor lists, the creation of various funds, reports and tracking of office rentals. On the organizational side, the collection has a nearly complete run of meeting minutes and annual reports from the 1950s through the 1980s. While it was not possible to completely ascertain when the League officially disbanded, this collection’s meeting minutes and reports end in 1989.

The last part of the collection worth highlighting focuses on letters, handouts and newsletters which served as the League’s outward attempt to gain support for their positions. This includes letters to state and federal politicians, pamphlets on various League campaigns, and newsletters which describe their activities from 1976-1989.

This collection is one worth highlighting because of the amount of information related to the Churchman’s League and their activities. It also provides a snapshot into how a religious organization thought and tackled a variety of different political issues. The collection will greatly serve future researchers and hopefully sooner rather than later!

Letters That Tell a Story 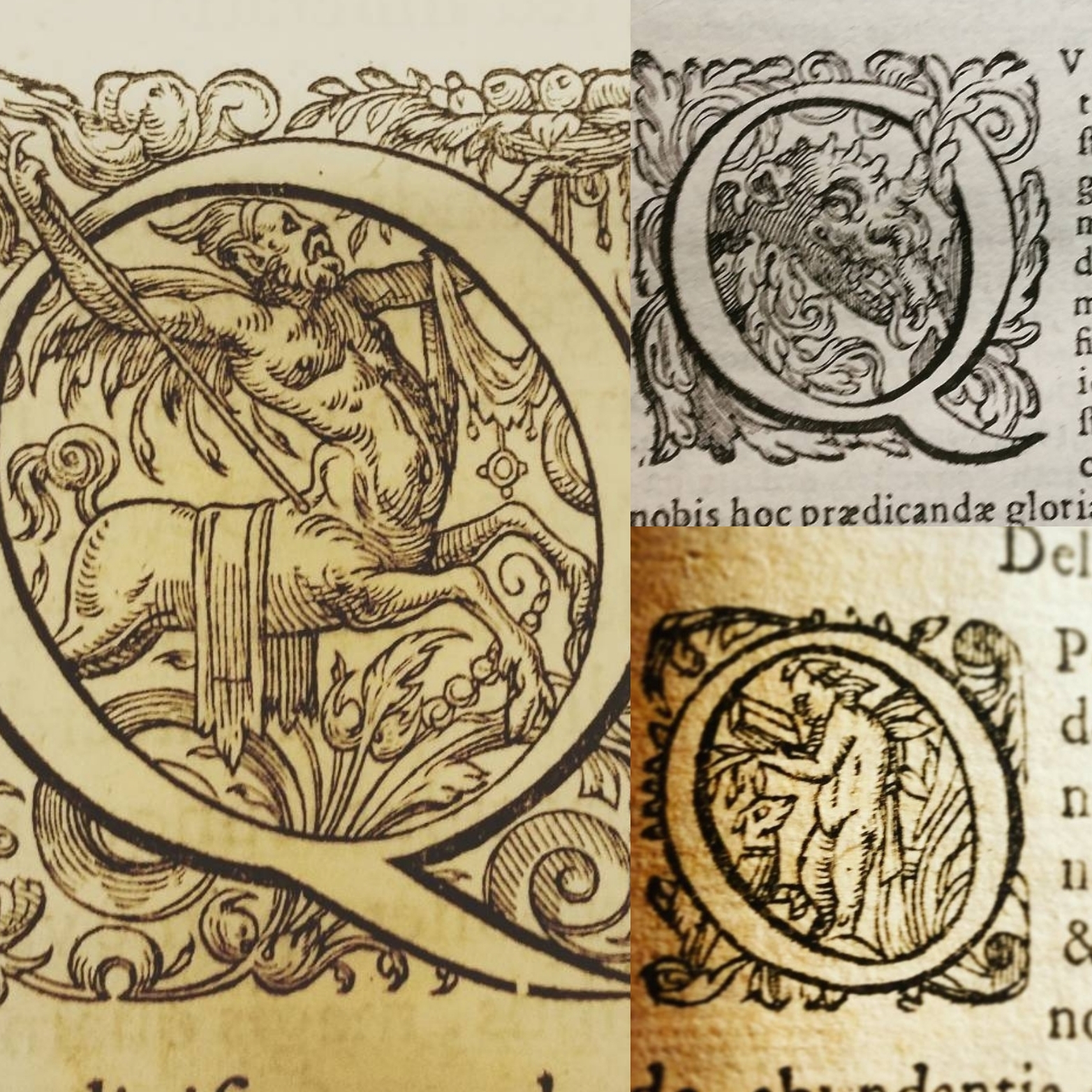 Some of my favorite bits of typography--which is a thing you get to have opinions on once you’ve spent enough time with the books--are historiated initials. These are the large capital letters that can be found at the beginnings of chapters or other sections of text with an illustrated scene either surrounding or inside of it. These initials are referred to in a variety of ways which can make research more difficult. You may see references to historiated capitals, or floriated capitals/initials (which are letters decorated with drawings of flowers and other botanical imagery, rather than a scene) or illustrated or decorated initials/capitals (which refer to any kind of decoration).

When printed books first appeared in Europe in the 15th century, they looked very much like the manuscripts that were already in circulation from the physical layout of the pages and the book itself to the style and subject matter of decorations. Historiated initials are a continuation of the same artistic tradition as the illuminated initials found in medieval manuscripts. A tremendous amount of variety in subject matter ranging from the serious to the whimsical can be found in these initials, often referencing common medieval subjects. Scenes from the BIble and classical mythology are very common as are depictions of animals and historical figures. You can see a galloping centaur, a sassy dragon, and a man reading to a dog pictured here. You’ll also often find “putti” or artistic depictions of chubby male children common in Renaissance art at various tasks.

The design of historiated letters was its own artform. It’s typical to see differences in style based on region and time period and use these as further clues when learning about how a book was made. Printers typically worked with a limited set of capitals, so this means you’ll often see the same images repeated in a single work and that the images depicted in the letters generally were unrelated to the subject matter of the book they were printed in. There are a few notable exceptions to this like, for example Andreas Vesalius’s De Humani Corporis Fabrica. This early medical textbook first published in 1543 features historiated initials designed specifically for its text. Most of them depict putti performing the medical works being described in the text: handling body parts, dissecting animals, and reading from their own medical textbook.

This example puts me in mind of one the mysteries from the Congregational Library’s collection. If you’ve been on a visit or for a tour, I have almost certainly pulled this out to show you:Theophylacti Bulgariae Archiepiscopi Tomus Primus by Joanne Oecolampadio (1524). A very religious book that features multiple historiated letters of a scatalogical nature. This could mean nothing--these sorts of images were very common in the medieval manuscript tradition and other art and this could simply be a coincidence, but I think it has to mean something when your printer uses these so liberally in your very religious book. The printer was Andreas Cratander, known for  printing Protestant works. Once research avenues open back up again, I’m hoping to look into some of his other work to get an answer for myself.