Did the Puritans celebrate Christmas?

We are all probably familiar with the stereotype of the New England Puritans as the ultimate kill-joys, always on the alert, as H. L. Mencken once said, for fear that "somewhere someone was having fun". What better evidence than the fact that they refused to celebrate Christmas? In 1659 the Massachusetts Bay General Court officially banned the holiday; anyone caught taking the day off or even 'feasting' was liable for a fine. Cotton Mather himself declared Christmas an "affront unto the grace of God". "Can you in your consciences think that our holy savior is honored by mirth," he demanded of his flock, "by long eating, by hard drinking, by lewd gaming, [or] by rude reveling? ... 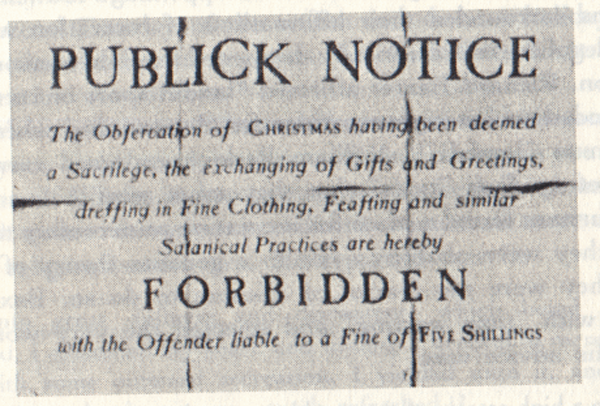 Shall it be said that at the birth of our Saviour ... we take the time to please the hellish legions and to do actions that have much more of hell than of heaven in them?"

But as is so often true, context is everything. The Puritans' resistance to Christmas formed at least partly in response to over-the-top celebrations in the English court. As Penne Restad writes in her wonderfully informative book, Christmas in America, the "annual indulgence in eating, dancing, singing, sporting, card playing, and gambling escalated to magnificent proportions" during the late sixteenth and early seventeenth centuries. King James I, of Bible fame, was said to have hosted a "moderate dinner" with a first course of 16 dishes!

What Cotton Mather and the other Puritans really wanted was a quiet and reflective day. They did not observe any of the special events in the traditional liturgical calendar — Sunday was the day to worship, period — but as a rule they did not object to non-Puritans celebrating Christmas by taking the day off. The problem was when they went out into the street to play noisy games or shoot off firecrackers. If you are going to observe the day, the reasoning went, observe it. Christmas should not provide an excuse for bad behavior.

But of course it does. Restad points out that from the very start, Christmas was a problem for Christians. At some point in the fourth century the Church combined celebration of Christ's birth with the Roman Saturnalia. It was a neat trick, ensnaring a pagan festival into the Christian calendar, but it introduced a new set of irritations that would only grow over time. When Gregory of Nanzianzus, who died in 389, urged the faithful to celebrate Christmas "after an heavenly and not after an earthly manner", could he have envisioned crowds of desperate shoppers streaming into the stores on Black Friday, armed with pepper spray?

One more interesting observation from Penne Restad about the Puritans and Christmas: shortly after the Massachusetts General Court outlawed the celebration in 1657, King Charles II demanded that they rescind the ruling; it was deemed an affront to royal authority. The Court complied, but barely, and over the years, New England's resistance to Christmas became more and more of a political statement against the power of the English hierarchy. In 1686, when the royal governor Edmund Andros attempted to hold a Christmas service in a Congregational meeting house, Bostonians forced him out and into the Town Hall. In 1722, the royal governor attempted to persuade Samuel Sewall to adjourn the General Court on Christmas Day, but he refused. We dissenters have come "a great way" for our liberties, he declared, and we will not allow you to tread on ours now.

Sometimes I feel the same way. I am not a great lover of Christmas — my family calls me the "Grinch", in fact — but it's the over-the-top celebrations that get me weary and grouchy. And I'd bet that in a week or so, as the television commercials have numbed our minds and the incessant Christmas muzak has drilled into our souls, a lot of us are going to feel some solidarity with old Sam Sewall. There are still powers to resist these days — not Anglican governors but every bit as overbearing. I imagine myself standing arm-in-arm with Sam when I refuse to buy a Pajama-gram for my cat. (It's true — you really can.) We've all come "a great way" for the liberty not to overdo it, and I'm not going to give that up without a fight.

So much for the Congregational Library's Holiday Party this year! Is pizza forbidden too? Well, Merry Christmas to y'all...and...go Peggy!