Sometime in the Fall of 1621, four hundred years ago, after over a year of suffering and the deaths of many of their number, the English puritans of the newly settled Plymouth Colony, whom we often refer to as the Pilgrims, gathered to celebrate a successful harvest.  Long described as the “First Thanksgiving,” over the past decades countless articles have challenged traditional descriptions of the event.  Was it or was it not the first?  Was it or was it not a religious observation?

There exist two accounts of the event.  One was a brief notation by Governor William Bradford in his history Of Plimoth Plantation. The other was a slightly longer account in a letter by the colonist Edward Winslow.  It is Winslow who provides the information that during the celebration, which lasted for days, about ninety members of the Wampanoag people, led by their Massasoit Ousamequin, joined the colonists and contributed five deer to the feast. 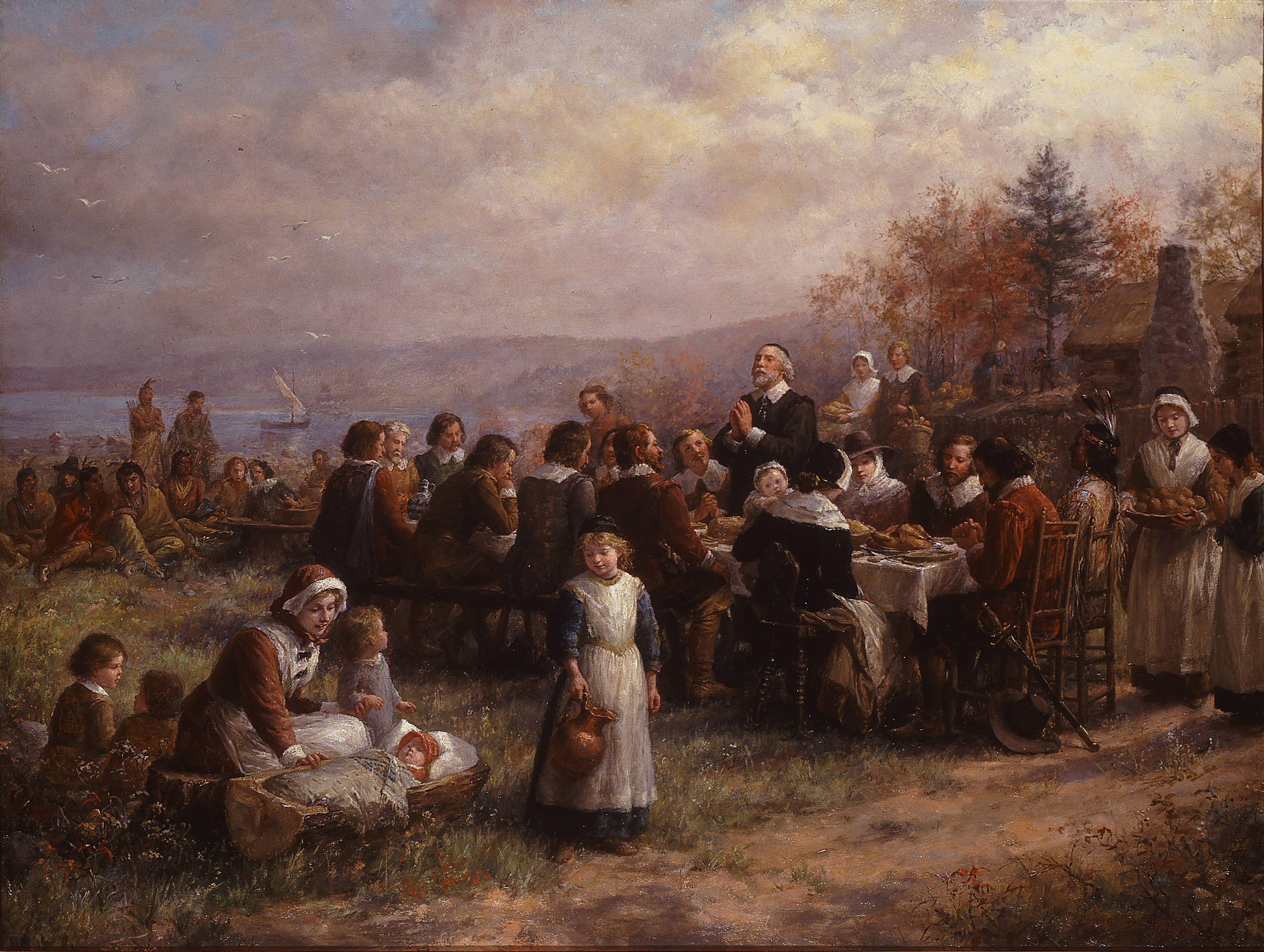 The issue of whether this was the “first” thanksgiving is easily disposed of.  Thanksgiving celebrations were commonplace.  At this time virtually all Europeans recognized no boundary between the material and the spiritual.  Everyone saw a supernatural dimension to the events of everyday life and acknowledged this by offering thanks to God for personal blessings such as the birth of as child, the recovery of a loved one from illness, or a successful harvest.  Governments and churches appointed special days of thanksgivings.  Most of the Pilgrims were old enough to have been among the Englishmen who celebrated the defeat of the Spanish Armada in 1588.  Believing that God was responsible for good fortune, there were many gatherings to offer thanks in the early Spanish and English New World colonies, one at least as early as 1541. In fact, the passengers on the Mayflower had offered thanks in 1620 upon safely reaching the shores of Cape Cod.  The fact that such events were common should erase any doubts that the Plymouth 1621 event had a religious base.  And a description of a later Plymouth colony thanksgiving (in Scituate) demonstrates the combination of prayer followed by a meal.

As for the Native presence at the Pilgrim thanksgiving of 1621, we don’t know if the Wampanoags were invited to the feast or whether, as some have argued, they heard the firing of guns by the English and came to investigate.  The devastation wrought by epidemic diseases introduced in the previous decades by European explorers offered little for the Wampanoag to be thankful for, and even less had they been able to foresee the ultimate consequences of colonization. But whatever explains their presence, they would have recognized what was happening, because they too believed that divine powers shaped their fortunes.   They had their own rituals that included feasting and exchanges of goods at the time of the corn harvest.

It was the presence of the Natives that distinguishes this occasion from the former European thanksgivings in the New World.  With their faith rooted in the Bible, the Pilgrims were well aware of the instruction in Deuteronomy 16: 13-14 that in celebrating bountiful harvests the Jewish people should include the strangers within their gates.  And so, on those days in the Fall of 1621, something briefly occurred from which we can learn.  The newcomers and the original inhabitants of the land demonstrated that it was possible for people who were different in many respects to live in peace.

Francis J. Bremer is Professor Emeritus of History at Millersville University of Pennsylvania and the author of numerous books on the puritans, including the recent One Small Candle: The Plymouth Puritans and the Beginnings of English New England (Oxford, 2020).