A is for Adam: the New-England Primer at the Congregational Library 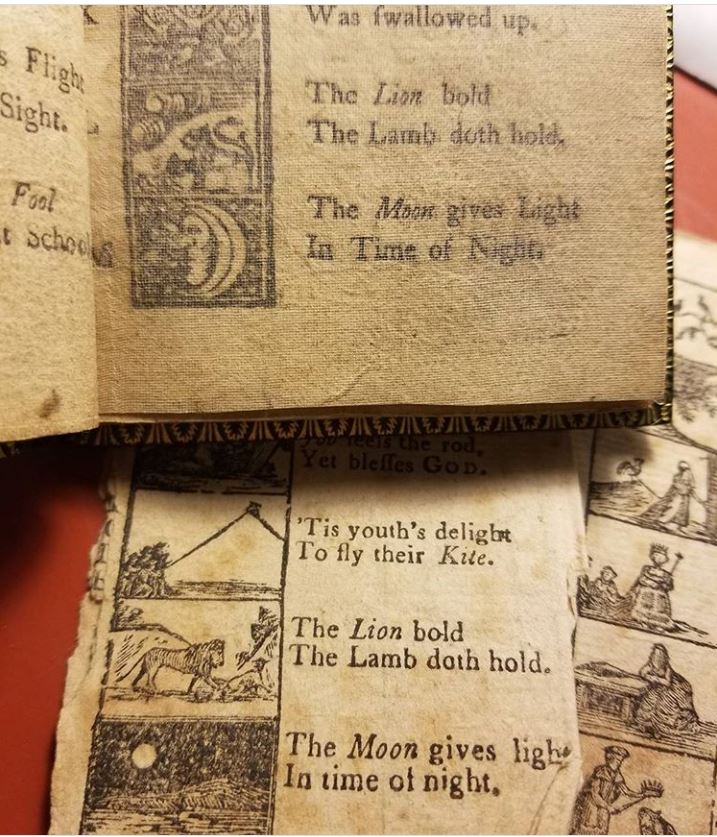 He who ne’er learns his A, B, C, for ever will a Blockhead be;/ But he who to his Book’s inclin’d, will soon a golden Treasure find

So begins the earliest edition of The New-England Primer in the library’s collection, printed in Boston some time in the 1780’s. As Zack mentioned in his recent post, the staff here just recently finished reading and discussing Lies My Teacher Told Me: Everything Your American History Textbook Got Wrong by James Loewen. It seemed fitting, then, to take another look at America’s first textbook.

The first edition of the Primer was printed in Boston in the late 1680’s by Benjamin Harris who was also the likely author of the alphabetic couplets it is known for today; however, the first known extant copy of the Primer was printed in 1727. Unlike today’s history textbooks, copies of the Primer were treasured by their owners and often loved to death which is why so few early editions survive. Our earliest copy, printed nearly a century after the first Primer, bears this out: the pages are so worn in places they’re barely legible. You can imagine how many different fingers have turned these pages over the last 300 years.

1727 was also about the time that the Primer began to take its most familiar form. First, general literacy instruction: the alphabet, wordlists of variable syllable lengths, alphabetized couplets and the woodcuts to go with them. Many editions also included the Lord’s Prayer and John Cotton’s catechism “Spiritual Milk for Babes” as well as Isaac Watts’ “Divine Songs” became standard inclusions in later editions. As with contemporary textbooks, political and cultural shifts in society were reflected in changes to the content of the Primer. After the American Revolution, references to the king were removed and his portrait was replaced with one of George Washington. Some editions had lines like “The British King lost states thirteen” added into the text. Periods of religious revival saw editions that included more prayers and hymns.

There are hundreds of different editions of The New-England Primer, all with slight variations, including five in the library’s collection spanning the years from 1780? to 1849. As with the textbooks of today, the Primer reflects the beliefs and opinions of its authors and the culture in which it was produced. Puritans had always been very concerned with their children’s education and the emphasis on literacy instruction at the beginning of each Primer reflects this. Before one could read the Bible, one had to learn to read, after all. The puritan concern with the world to come also features prominently in the text. Barely a page goes by without the reader being reminded of their own mortality with lines like: “time cuts down all/ both great and small”. This might seem morbid to us today, but it’s indicative of the importance placed on education: it was necessary to save one’s soul.

Our recent reading shows the ways in which our educational texts are still attempting to inculcate certain values, though, as the author empahsizes, which values those are is worth further examination. No one is carrying around their high school history textbook until it falls apart, unless it’s the same book that’s been assigned for the last two decades. Certainly, The New-England Primer benefitted from relatively little competition when it came to children’s entertainment, but given the importance of the study of history (especially when the chances of repeating seem alarmingly high), finding something that speaks to children in the same way can only help.