This Book is Haunted: Imagining the Previous Lives of our Collections 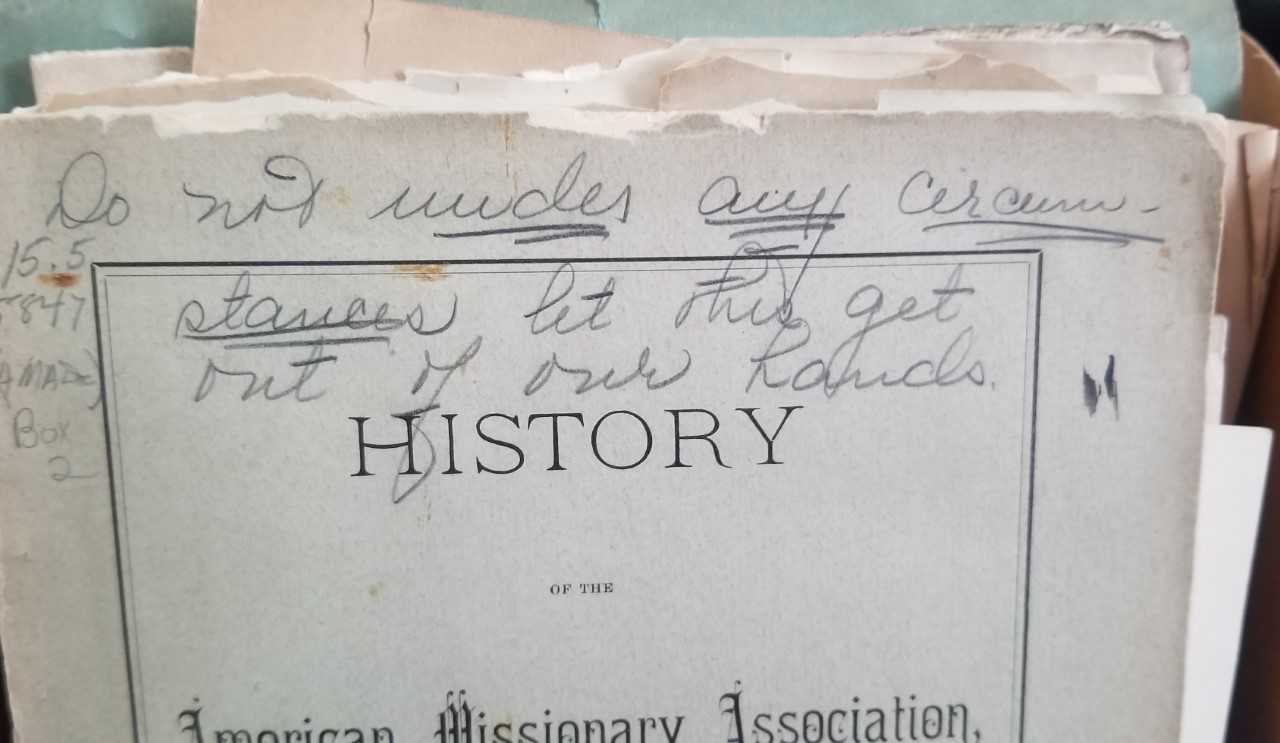 Most of you have been sternly warned off leaving traces behind in your library books--writing, highlighting, dog-earring pages, all strictly verboten. And while I certainly stand behind this advice when it comes to your public library’s copy of Where the Crawdads Sing or in the instance I once read about where some helpful patron had underlined the name of the killer in nearly every mystery novel the library owned, this sort of paratextual material provides a wealth of information to library staff and future researchers interested in learning more about our the items in our collection and the lives they lived before they arrived on our shelves.

This post was inspired by a rather alarming inscription I found scrawled on the front cover of a pamphlet (see above). It reads: Do not under any circumstances let this get out of our hands. This is like catnip to someone like me who got into this field primarily so I could use my research skills to solve historical mysteries. The story here is almost certainly more mundane than what the inscription would indicate. The pamphlet is an otherwise unremarkable history of the American Missionary Association with no other markings inside it--no snarky commentary, no deep secrets, not arcane knowledge, alas. It’s unclear when this inscription was added--whether it was at the CLA or in the possession of the institution that donated it. My best guess is that other copies of this pamphlet or similar pamphlets had a habit of ‘walking off’ or getting lost and they were becoming hard to replace. Think of it as a precursor to the public library’s tattletape or a milder version of a Medieval book curse.

I was also reminded of another pamphlet I stumbled across with a similarly memorable inscription. It was an Anti-Masonic almanac from 1832 and someone had ominously written “Secrets written in blood should be revealed. A tree that bears such fruits should be hewn down” in ink around the edges of the cover. This book is definitely haunted. The quote comes from President John Quincy Adams--and what a quote!--referencing the disappearance and alleged murder of former Mason William Morgan who threatened to publish a book revealing the secrets of his former lodge. This event sparked a wave of Anti-Masonic sentiment across America which you can see reflected in the other Anti-Masonic materials in the library’s collection.

Much of the material at the CLA--and our oldest material in particular has come to us secondhand. Marginalia, Ex Librii and other paratextual evidence give us unique insight into the context in which the materials in our collections were received, made use of, and created. Special Collections librarians--people who work primarily with rare books and archives--are particularly concerned with provenance. This term refers to information about the origins, custody or ownership history of a collection, manuscript or book. For books, this can give us information about the sort of people who owned different types of books--their age, gender, and socioeconomic status. When a previous owner is an author in their own right we might be able to speculate about what books may have influenced their work, allowing for the fact that just because you own a book doesn’t mean you’ve actually read it (as my ever-growing To-Be-Read pile can attest). Many books bear the marks of their previous owners in the form of an Ex Libris which might take the form of the owner’s signature (e.g. SO-AND-SO, her book), or an artistically designed bookplate the owner has used for their entire library. One fantastic example in our collection comes from a book by S. H. De Kroyft, “the blind authoress”, which bears her bookplate in Boston Linetype, a system of writing designed for the vision-impaired and an early precursor to braille.

Other books give us unique insight to how previous owners reacted to their reading through marginalia--notes written in the margins or endleaves of books--or other means. My favorite example of this in our collection is a copy of The Theological Works of Thomas Paine previously owned by someone who absolutely hated Thomas Paine. Prior to encountering this book, I had no idea how divisive Paine had become in America after the Revolution. The owner of this book has left insults (“aka the devil” written underneath Paine’s frontispiece) and pointed commentary throughout the book. There is a wealth of information to be gleaned there about public reactions to Paine’s work, information that may not be available elsewhere if the owner kept his opinions between himself and the pages of this book.

If there’s one thing I hope readers will take away from this post, it’s that books are objects intended for use: go ahead and leave your mark and for the sake of the nosy librarians of the future, make sure you don’t leave out the good stuff.