Adapted from an article originally published in the CLA’s February 2020 Bulletin. 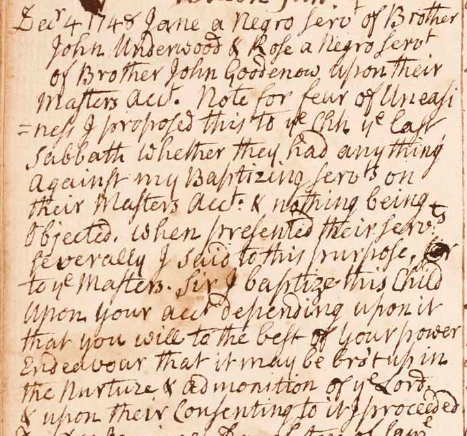 Hidden Histories. Untold Stories. Behind the Veil. These are the titles of some archives-based history projects with which myself or my colleagues have been involved. A simple internet search will produce hundreds of similarly arcane-sounding names. Hopefully the first one rings a bell - as in New England’s Hidden Histories, the CLA’s flagship project to digitize and publish a large number of colonial-era records sourced from across New England.

But what’s up with these names? Why this particular emphasis on uncovering, unveiling, and bringing to light? By now, the litany of historical exclusion is largely familiar, even to non-historians: the experiences of women, people of color, the enslaved, Indigenous, the working poor, and LGBTQ people, among others, are generally understood to have been minimized or ignored in historical writings before the latter half of the 20th century.

In archives, libraries, and museums, the remediation of historical oversights can take many forms; on the archivists’ end, it can entail improved cataloguing, descriptions, and subject-tagging to highlight hitherto buried materials. It can also be accomplished via the production of new source narratives such as those recorded during oral history project interviews, and more generally by a broadening of the pool of statistical data available to researchers, allowing for the extrapolation of demographic trends which would otherwise remain invisible. The Internet Age has facilitated this by allowing for the confederation of collections which are physically held in separate geographic locations.

There are obvious implications here for New England’s Hidden Histories, which hosts a panoply of records including both quantitative and qualitative types of materials, sourced from myriad churches and cultural institutions across New England. Church record books and their associated vital statistics are a mainstay of our church-based collections. On the qualitative side, there are personal accounts such as those described in relation of faith documents (formalized confessions written to gain church membership), which, to quote the NEHH introduction page, “offer insight into many under-documented populations including women, children, Native Americans, slaves, and indentured servants.”

Both types of records in the NEHH collections were utilized by Professor Richard Boles of Oklahoma State University in his research into African-American and American Indian church membership in colonial New England. Richard presented this research in his lecture Interracial But Not Integrated: Colonial Churches, hosted by the CLA and the Old South Meeting house last summer as part of the History Matters lecture series (Richard’s talk was recorded by WGBH Boston and is available on YouTube).

Nonwhite church members were racially identified in church records - albeit subject to shifting vocabulary as race was continually conceptualized and re-conceptualized by those in power. This practice of racial identification, while born out of a distasteful ideology of exclusionism and white-supremacy, has had the positive effect of making people of color visible in the historical record. As part of his research, Richard compiled a broad geographical array of statistical records, particularly baptisms, in order to determine membership demographics. He was able to demonstrate a steady continuity of minority Black and Native membership, to pinpoint cases where slaves attended different churches than their owners, and to measure the effects of the Great Awakening on church attendance by people of color, among other things. The picture that emerged was one of much more diverse church membership than is usually assumed:

“For too long, many educated people and historians have written about colonial churches as if there were no Black [people] or Indians present. On the contrary, most Congregational and Anglican churches in New England included people of color in the 18th century. They participated in these churches as attendees, and through rituals of baptism and communion.”

In support of the latter point Richard also cited personal documents such as the relation of faith by Cuffee Wright (1773), an enslaved man owned by Rev. Sylvanus Conant, minister of the church in Middleborough, Massachusetts. Cuffee’s testimony, which is included in the digitized NEHH collections, appears to be a genuine personal account of both his worldly and spiritual life, though Richard was quick to point out that, prior to abolition, it is impossible to know how much enslaved people participated in church life of their own free will, versus how much they were compelled to do so by force, threats, or persuasion. I imagine this was particularly fraught when one’s owner was the minister of the church in question!

He was, however, able to cite some convincing examples of enslaved people who seem to have found genuine comfort in church life, and in the opportunities it provided for community and education. These same members also increasingly used scripture to establish a case for the abolition of slavery. Among other qualitative evidence, Richard cited the correspondence of Phillis Wheatley and Obour Tanner, and the record of a sermon preached by an enslaved black man named Greenwich, who made a biblical case for abolition in the Canterbury, CT Separate Congregational Church in 1754 while his owner, who was also a church member, presumably looked on. (Thirty-seven years later, Jonathan Edwards Jr. echoed parts of Greenwich’s phrasing to make the same point about the spiritual necessity for abolition. Better late than never?)

My summation of Professor Boles’s research is patchy at best and I encourage you to look up the full lecture (link in the end notes). But I believe it serves as a good example not only of our NEHH records being utilized for new and exciting research, but also of how more personal, subjective records can be married with plentiful data points in order to create a more holistic understanding of the past.

Cooper, J. F. (2013). Cuffee’s “Relation”: A Faithful Slave Speaks through the Project for the Preservation of Congregational Church Records. The New England Quarterly, 86(2), 293–310.