Now You See It, Now You Don’t: Disappearing Fore-edge Paintings in the Congregational Library’s Collection

Judging a book by its cover gets a bad rap, but the outside of a book can tell you a lot about the owner and the value they placed on what’s on the inside. Historically, books have been status symbols and there is virtually no end to the way they can be decorated to show off the owner’s superior taste and finances from intricate bindings made from expensive materials to decorative hardware like clasps and cornerpieces.

A book’s edges are also commonly decorated in any number of ways. They may be gilded on all sides, or only the top edge is you’re looking to impress anyone perusing your bookshelves from above while also saving a few bucks. They might be gauffered, where designs are carved into the text block. Or, they may be painted. Often, these decorative fore edge paintings are not obvious. It’s like a magic trick--they only appear when the text block is fanned out. Otherwise, when the book is closed, they look like a normal gilt edge, or maybe a slightly dirty one. We have two such examples in the library’s collection.

The first is 1798 Book of Common Prayer printed in Oxford at the Clarendon press by W. Dawson, T. Bensley, and J. Cooke (RBR 11.4.388 1798). It depicts a scene of a building (maybe Oxford?) in the background with greenery and deer in the foreground.

The second is a more recent ‘discovery’-- it’s a copy of the New Testament written in Hebrew published in London by the Society for the Promotion of Christian Knowledge in 1813 (RBR 4.7.67). The painting looks like it might depict the arrival of the three Magi.  I use the word ‘discovery’ here with some mixed feelings--someone in the past had helpfully noted the fore-edge painting on the fly leaf but it had never been documented in the catalog record. We didn’t realize what we had until we were packing the books in the Rare Book Room in preparation for our renovation. 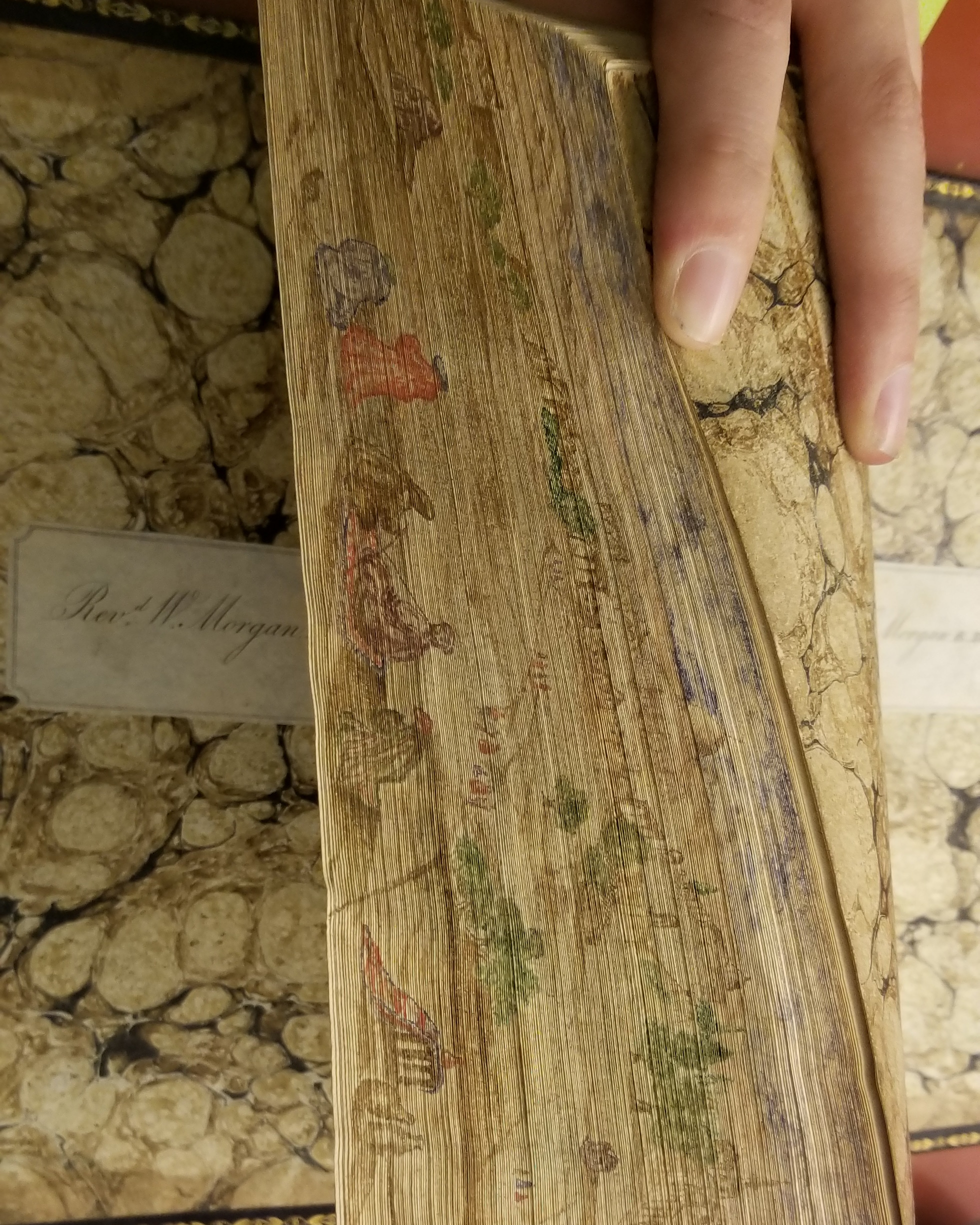 Fore-edge paintings like these were popularized in the mid-18th century and have remained popular into the modern era. Paintings commonly depicted landscapes, portraits, or religious scenes, and so the examples in our collection are typical in that respect. Paintings were added by booksellers, owners or artists themselves which accounts for the wide variety in subject matter. Paintings are created by fanning out the text block and securing it while the image is painted on. Some books have a second fore-edge painting visible when the text block is fanned out in the opposite direction.  The work is expensive and time-consuming, so it was used most commonly on books that were highly valued by their owners.

Although we have no knowledge of other paintings in the collection at this time, I don’t think finding another is outside the realm of possibility. I’m looking forward to resuming ‘the hunt’ once we can safely access our collections again.