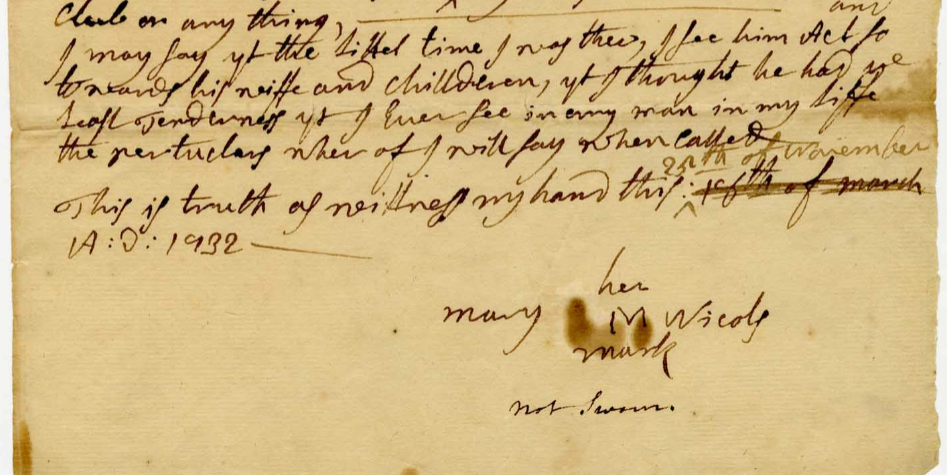 *Content warning: this article discusses potential domestic abuse in the context of a historical court case

Some of the most colorful, subjective, and unusual New England's Hidden Histories records come from our “personal papers” series, otherwise known as Series 2. Personal papers are differentiated from the church administrative records which comprise Series 1, and the conference and non-church organizational records of Series 3.

A prime example came to us recently via our project partners at the Connecticut Historical Society: the fascinating, mystifying, and rather depressing disciplinary case records of one Mrs. Mary Tilden. The case actually involved a dispute between Mary and her husband Stephen Tilden, but, tellingly, Mary was the one on trial. The reason? She had absented herself from the marriage and fled to live with relatives.

The Tildens were members of the First Church in Lebanon, Connecticut. If you read my last blog post, A Drama In Connecticut, you might remember that this is the same church where congregants split into riotous factions and arrested each other during the infamous "Meeting House War". There must be something in the water!

Before the separation of church and state, even seemingly civil cases such as Mary's were tried by the local church committee, presided over by the minister. In this case the minister was Rev. Solomon Williams, a Harvard graduate and clergyman of some distinction in his day. According to author Emerson Davis (1798-1866) Williams “held a prominent place among the clergy of New England and had an extensive correspondence with American and European divines.”

The disciplinary case proceedings reveal that Mary had separated herself from her husband Stephen sometime before or during 1732. Marital separation was not acceptable in the eyes of the church committee, representing as it did a breaking of the couples' sacrosanct vows. The onus was consequently on Mary, the absentee, to defend her actions and offer up some reasonable excuse.

Mary's statement in her own defense claimed that her husband had “committed ye sin of fornacation [sic] with Sarah Ellis” and gave this as the reason for her alleged absenteeism. The fairly limited picture which she presents is fleshed out by witness testimony. An acquaintance of the couple, Mary Nicols, paints a disturbing picture of Stephen's potential for violence, describing an incident in which she heard him threaten to 'beat a boy’s brains out' because a part for his cart was missing. She adds:

“the little time I was there, I see him act so towards his wife and children, I thought he had ye least tenderness I ever see in any man in my life.”

The second, and only additional recorded witness, Humphrey Davenport, presents a view of Stephen so radically different from Nicols's that it seems impossible that the two witnesses are describing the same man:

“By ye singular expressions of his love and tender regards towards her, which he so variously manifested & so often repeated that during ye whole of my abode at his house I did esteem him…a real patern of conjucal love.”

The limited and contradictory evidence of the case leaves the modern reader with more questions than answers. Nicols's testimony certainly implies that Stephen was capable of violence, and yet Mary herself never mentions physical abuse as part of her plea. I found myself wondering if perceived "discipline" by the paterfamilias toward his wife and children, whether physical or verbal, was accepted to a certain degree, and consequently would hold up less well in court. Fornication, of which Mary does accuse Stephen, was considered illegal as well as sinful, and may have presented a more convincing legal argument.

In the era of #MeToo and #BelieveWomen, it's almost unthinkable to consider Mary's case without reference to feminist critique and modern awareness of spousal or intimate partner abuse. Davenport's description of Stephen as unusually demonstrative and loving, paired with the alleged outbursts witnessed by Nicols, would not be out of place in a modern profile of a charismatic abuser. But ultimately, and especially without further testimony from Mary Tilden herself, the truth behind the dramatic conflict will always remain a mystery.

In any case, Stephen Tilden was granted official leave to demand that Mary return to him. To add insult to injury, he also insisted that she publicly apologise for all the ‘trouble’ she had caused. Mary however seems to have thumbed her nose at both Stephen and Rev. Williams's demands. Her brother Joseph Fowler, with whom she had been staying, replied to a church summons in December of 1733 by claiming that his sister had recently left town. A note below his letter, probably penned by Rev. Williams, records the church's decision "to suspend the consideration of said case for some time till something farther appears."

This digital resource has been made possible in part by the National Endowment for the Humanities: Exploring the human endeavor.