Adventures Through the Catalog and What We Found There

When you tell someone you’re a librarian, it’s only a matter of time before you hear a Dewey Decimal joke. Surer than the sun rising in the east, or people’s eyes beginning to glaze over when I tell them that, actually(!), Dewey Decimal is only one of many classification systems, and isn’t usually found outside schools or small public libraries. The Congregational Library, for instance, has its own bespoke way of classifying books. A recent deep dive into our collection has resulted in taking a much closer look at our classification scheme and its quirks. I’ve come to know it intimately the way you know an old house. Because you’ve lived inside it, leaky roof, drafty windows and all. I’d like to offer a glimpse behind the curtain.

Most classification schemes used in academic or public libraries are designed to describe and organize the whole of human knowledge--a lofty goal! The parameters of the CLA’s collection are far narrower, and so while our classification scheme doesn’t need to be quite so expansive, it does need to allow our patrons to find the very specific things they’re looking for, such as sermons about murders and dueling or the histories of small churches in New England. Dewey is simply not up to the task. As far as anyone can tell, our classification scheme began with the library. Librarians tend to be inveterate record keepers, but unfortunately any documentation about how our classification scheme came to be or changes that have been made over time were either not recorded or have been lost. What that means is that when I go through the collection now, a large part of my job is imagining what some long-gone previous cataloger was thinking. 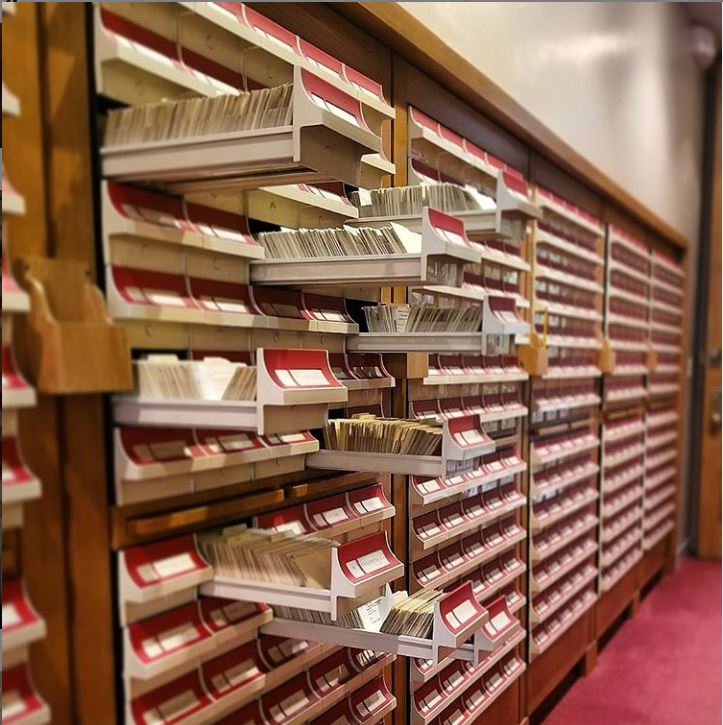 The CLA’s classification scheme is an artifact in and of itself. The particular language choices and ideas about how things are organized in relation to one another reveals a lot about the worldview of whoever first created it. In the American history section, I was amused to find material about the Civil War described as “the War of Southern Rebellion”. As someone who grew up watching an irate Yosemite Sam insist it should be called “the War betwixt the states”, this was a nice counterpoint. Of course, when you take into account Congregationalists’ historical support for abolition, this makes sense. Some peculiarities are mostly a testament to inertia. Also within the American history section, we have material on the states arranged alphabetically across four sections; however, many books on the history of Hawaii are actually found under a fifth section, the one for U.S. territories. Hawaii hadn’t yet become a state when the scheme was created, and these books were never reclassified (more recently published books on Hawaii are classified correctly). Because our stacks are closed, correct classification is generally less important than robust description which allows material to be found by patrons in our online catalog. Since these books have always been findable, I can see why other projects were prioritized ahead of correcting these errors, but that doesn’t mean it shouldn’t be changed going forward. To leave material on Hawaii in this section for the past 60 years is to reinforce the idea of it as different from other states, something fundamentally ‘other’.

Sometimes, it takes a bit of research to understand the scheme’s peculiarities. Before restructuring our section about non-religious societies, I was confused to find that the section about Freemasons listed material on the Klu Klux Klan as a subset. After a bit of digging, I learned about a pervasive conspiracy theory that the KKK was founded as a wing or reincarnation of the Freemasons. Given that most of our Freemason material is actually ANTI Freemason material (and one very interesting 18th century pamphlet about the illuminati), it would appear that some mysterious past cataloger fully bought into that particular conspiracy theory. The section on Roman Catholicism is similarly reflective of the historic prejudice and mistrust Congregationalists felt towards them. It is divided into two sections, “general” and “controversial” works, but one is equally likely to find explicit anti-Catholic sentiment in either.

These quirks give us a glimpse into the mind of those who created the classification scheme and how they saw Congregationalism in relation to the rest of the world (and vice versa) and for that reason they are worth documenting. It’s also proof that the ways in which we organize information are only as neutral as we make them. Some of the language and organizational choices here may seem like humorous anachronisms, but leaving these descriptions unexamined and un-updated reinforces the same biases in place when they were created. When we are classifying material as ‘controversial’ or looking at which changes have been prioritized and which haven’t, it behooves the librarians and archivists on staff to ask ourselves “why” and make those things clear. As our classification scheme is rewritten and language is updated, we will strive to do better by correcting historical biases while preserving them in historical notes so that the information they convey won’t be lost to time. This work is on going, and the librarians and archivists on staff in the future will certainly be making similar changes years from now.