The latest additions to our New England's Hidden Histories program come from our project partners, the New England Historic Genealogical Society. The collections comprise papers from two prominent Massachusetts families, the Hoveys and the Wigglesworths. Cumulatively they span a broad timeframe, from the late seventeenth century to the end of the eighteenth. Both collections begin with the personal papers of the family patriarchs, Rev. Michael Wigglesworth and Rev. Ivory Hovey. Later materials consist of their children's and grandchildren's correspondence, business, and legal records.

Both families were heavily involved in contemporary society. Rev. Wigglesworth was a popular poet, and his son and grandson were professors of divinity at Harvard College. The Hovey family documents bear witness to significant historical events of the time, including the 1775-1776 Siege of Boston, the 1783 evacuation of New York, the reading of the Declaration of Independence, and the American retreat from Ticonderoga. Also of note is Olive Hovey Pope's letter home to her parents, in which she describes her experience on the Maine frontier, including mention of "a grate plenty of woolves" which were troubling the livestock. 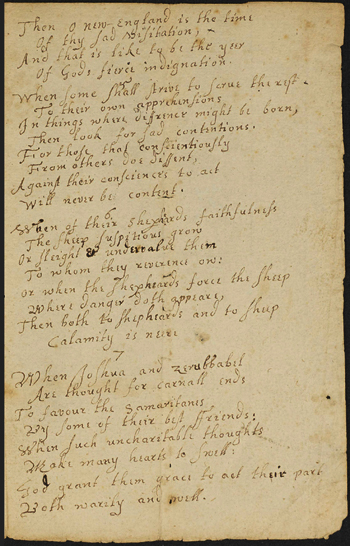 This collection includes personal papers from three generations of the Wigglesworth family of Massachusetts. The majority of them were produced by Rev. Michael Wigglesworth (1631-1705). Rev. Wigglesworth was also a poet, penning The Day of Doom in 1662, which went on to become one of the most popular poems in New England at the time. Other papers in the collection belong to his son Edward Wigglesworth, Sr. (ca. 1693-1765) and grandson Edward Wigglesworth, Jr. (1732-1794). Both men served as professors of divinity at Harvard College, and Edward Jr. was also a merchant in Boston. Their papers include correspondence, deeds, estate papers, poetry, and records of estate settlements and property exchanges. Many of the documents are written using various systems of shorthand.

Rev. Ivory Hovey (1714-1803) was minister of the First Congregational Church of Mattapoisett, and later the Second Church of Plymouth at Manomet in 1770. He and his wife Olive Jordan had five children who lived to adulthood; three of his sons served in the American Revolution and his daughter Olive settled with her husband on the Maine frontier. The family material includes four letters from Rev. Hovey's sons, Dominicus (b. 1740), Ivory III (b. 1748), and Samuel (b. 1750), who witnessed notable events of the American Revolution. The items in this collection include correspondence, sermons, ecclesiastical council decisions, church records, vital records, and other papers relating to family affairs and Rev. Hovey's congregations.