The latest additions to our New England's Hidden Histories program come from our project partners, the New England Historic Genealogical Society. This material relates to the Massachusetts parishes of West Stockbridge and Boylston (formerly part of Shrewsbury), and consists of church record books and associated materials. Both collections are primarily comprised of eighteenth-century records, which include admissions, member lists, baptisms, marriages, and funeral registers. 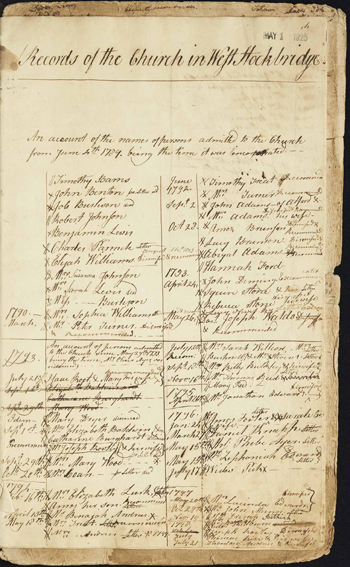 The First Congregational Church in West Stockbridge, Massachusetts was founded in 1789, along with the town itself. The meeting house was also used for civic purposes, and was shared with a local Baptist congregation until 1793. A Second Church was formed in 1833 to serve the area's growing population. The volumes include the First Church's record book, as well as an assortment of loose documents found inside the volume.

The North Precinct or Parish of Shrewsbury, Mass., was established in 1742, with Rev. Ebenezer Morse ordained as its first pastor. This parish remained a part of Shrewsbury until 1786, when it was established as the town of Boylston and its church became the Congregational Church of Boylston. The church record book consists of handwritten entries of member admissions, baptisms and marriages. It was composed by Rev. Morse, who was ultimately dismissed in 1775 for his loyalist sympathies.