These two new collections in our New England's Hidden Histories program are provided in partnership with the New England Historic Genealogical Society. Rev. Jonathan Parsons and Rev. William Rand were both Congregationalist ministers in Massachusetts, but the two men held very different opinions of the Great Awakening, the evangelical zeitgeist of the 1730s-40s which swept through much of Britain and America. The movement emphasized personal salvation and encouraged a degree of unity across different denominations. Ironically, it also created serious divisions within existing traditions, which began to fracture along the lines of converts and traditionalists.

Rev. Parsons was a convert to the movement and a personal friend of the famous evangelist George Whitfield, while Rev. Rand became a staunch opponent of the new theology. Despite their differences, the two ministers did have one notable circumstance in common; the views of both men were at odds with their congregations, who consequently swapped them out for more suitable candidates. Both Rev. Parsons and Rev. Rand were rehoused with congregations whose views more closely matched their own. 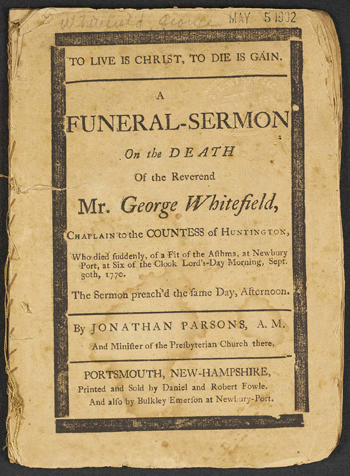 Rev. Jonathan Parsons (1705-1776) graduated from Yale in 1729, and was the minister at the First Church in Lyme, Connecticut from 1729/30 to 1745. He was heavily influenced by the Great Awakening, particularly by the evangelists Gilbert Tennent and George Whitefield, the latter of whom became his personal friend. Rev. Parsons was subsequently compelled by traditionalist parishioners to leave his parish in Lyme. George Whitefield personally recommended him to the new Presbyterian Church of Newburyport, Mass., and he took up ministry there from January 1745/6 until the end of his life. The collection consists of notes for sermons delivered by Rev. Parsons in his home parish of Newbury, as well as a published print copy of a sermon originally delivered at the funeral of George Whitefield, who died suddenly "of a fit of asthma" in Newburyport in 1770.

Rev. William Rand (1699-1779) was born in Charlestown, Massachusetts and graduated from Harvard College in 1721. He was the minister at Sunderland, Mass. from 1722 until 1745, when he was dismissed due to his opposition to the Great Awakening. He subsequently replaced the Rev. Thaddeus McCarty as minister at Kingston, Mass. when the latter was dismissed for inviting the evangelist George Whitefield to preach there. Rev. Rand remained at Kingston from 1745 until his death in 1779. The volumes in this collection contain a large number of Rev. Rand's sermons preached after his move to Kingston. These were largely delivered in his home parish, but also in neighboring communities such as Plymouth and Duxbury.