The latest additions to our New England's Hidden Histories program are three collections of association records representing a diverse set of Massachusetts churches. These early records offer insight into the administration of geographically linked churches and the communities these conferences fostered. They afford a look into the installations and ordinations of ministers, and the controversies surrounding some of these appointments. The records also include ecclesiastical councils for disciplinary cases, highlighting how these early associations provided fellowship between individual churches and pastors. These collections represent some of the earliest direct foundations for the Massachusetts Conference of the United Church of Christ. 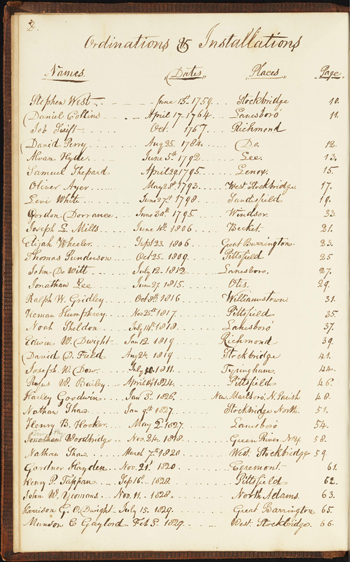 The Berkshire Association was formed in 1763. Due to its significant size, the association separated into two distinct organizations in 1852 — the Berkshire North and Berkshire South Associations. Included within this collection are four volumes of association and ecclesiastical records which cover a broad range of topics including meeting minutes, voting records, committee reports, copies of founding documents, and council results. This collection also includes extensive records related to disciplinary cases and controversies within the conference.

The first mention of the Hampden Association — divided into East and West — is in the Massachusetts General Association meeting in 1814, though the association dates to a much earlier year. The bulk of this collection is association minutes and reports, which broadly contain meeting minutes and records of votes, ordination proceedings, the results of ecclesiastical councils, discussions of religious matters, and disciplinary cases. Also included in this collection are a volume of association records, which includes the association constitution, and correspondence related to religious and ministerial matters.

The Marlborough Association was formed and first met in 1725 in the house of Rev. Robert Breck, the second minister of the Marlborough First Parish Church. The association dealt with "cases of conscience, questions of difficulty in church discipline, or matters of disagreement, between the parties in a church, or between pastor and people." Due to declining membership, the ministers decided to dissolve the association in 1814. This collection includes two volumes of records which contain meeting minutes and the results of votes, committee reports, membership lists, and copies of the association's founding documents.