Today, the records of two historic churches join the New England's Hidden Histories program and continue to expand the program’s offerings of valuable church records from areas south of Boston. These records from Berkley Congregational Church and the First Congregational Church of Harwich offer illuminating insights into eighteenth- and nineteenth-century religious and political life within New England. The diverse types of materials covered by these two collections include sermons, vital records, pew deeds, disciplinary cases, and copies of the petition submitted to the Massachusetts General Court which led to the formation of the South Parish in Harwich. 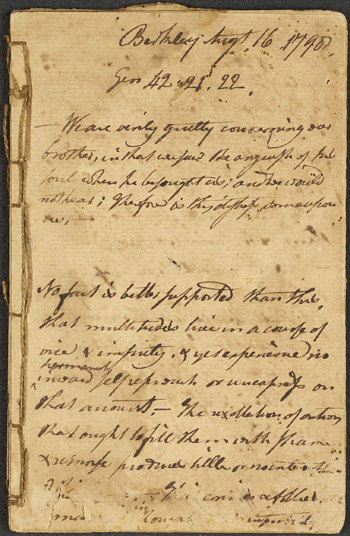 The First Church of Christ in Berkley was gathered in 1737 in the newly incorporated town of Berkley, Massachusetts. In 1737, the town agreed to settle Samuel Tobey, a young graduate of Cambridge. After Rev. Tobey passed in 1781, Thomas Andros, a self-taught veteran of the American Revolutionary War, was settled in Berkley in 1788 following a seven year search. The records in this collection include manuscript sermons preached by both Rev. Tobey and Rev. Andros, two disciplinary cases related to members of the church, and the oldest record book of the church, all of it in Rev. Tobey’s hand, which includes both administrative and vital records.

The First Congregational Church of Harwich, Massachusetts, was founded in 1747 when the town of Harwich was split into the North and South Parishes. On April 8, 1747, the precinct voted to complete construction on a meeting house which was finally completed in 1748. In 1747, Edward Pell, a Harvard graduate and Boston native, preached to the South Parish, and soon after he accepted a call to become the first minister of the new church. Present within this collection are five volumes of extensive church records, including valuable financial records, pew deeds, vital records, members lists, meeting minutes, and treasurer reports. Also within the collection are church communications and records related to the formation of the South Parish in Harwich, including copies of the petition submitted to Massachusetts General Court.