This newest batch of digitized material from our New England's Hidden Histories program is once again provided in partnership with the Phillips Library at the Peabody Essex Museum. It primarily includes the sermons of four ministers from northeastern Massachusetts — Revs. Edward Barnard, Dudley Leavitt, Samuel Phillips, and John Richardson — spanning more than a century. These documents provide a look into the topics they found important and how they addressed them. Take a look and see what stands out to you. 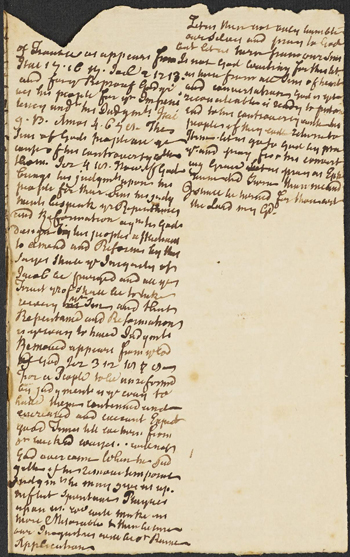 Rev. Edward Barnard was a Harvard graduate like many of his ilk, and went on to become minister at the First Church in Haverhill, Mass. from 1743 until his death. This collection contains more than 200 of his sermons, covering much of his career from 1739-1774. The first three volumes are dated and contain the majority of the sermons, with a further six smaller volumes of undated material. Rev. Barnard recorded the locations and dates of preaching in the sermon headers — like many ministers of the time he recycled sermons through the years, performing some of his "greatest hits" at appropriate liturgical occasions. The earliest ones were delivered at various locales such as Bradford, Wilmington, Salisbury, and Andover, and later re-used in his home parish of Haverhill.

Rev. Dudley Leavitt, a Harvard graduate like most early New England ministers, was served at the Salem Tabernacle Church from 1745-1762. He succeeded the controversial Rev. Samuel Fisk, whose dispute in 1735 with the First Church in Salem had led to the Tabernacle Church's creation. This collection consists of two short volumes of Rev. Leavitt's sermons, preached from 1740-1751 in Salem. The second volume includes a foray into politics, with a 1746 sermon condemning the Jacobite Uprisings in Scotland.

This collection includes two sets of sermons by Rev. Samuel Phillips, minister of the Congregational Church of Rowley from 1651-1696. The first volume (1670-1695) contains three iterations of sermons preached on Exodus 20:12. The second volume (1690-1723) is more varied in content, and also includes a posthumous document detailing the Proceedings of a Council at Reading in 1723. Also included is the transfer of Boxford Second Church parishioner Elizabeth Holt by Rev. John Cushing in 1746.

Like many New England ministers of the day, Rev. John Richardson was a Harvard graduate, receiving his degree in 1666 and staying on as a tutor at the college. In 1675 he was ordained as minister of the First Church of Newbury, Mass., where he remained for twenty-one years. The digitized collection comprises detailed notes for some sermons preached towards the end of his life in 1692-1693.