The Congregational Library and Archives has a collection of children's books that may have been given as Christmas gifts in the late 19th century. The Congregational Sunday-School and Publishing Society published children's books between 1841 and 1917, intended for use in Sunday school or in the home. The publishing house itself is an interesting story, one we have in our records. 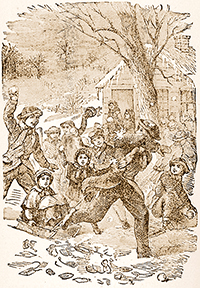 These books were used by Congregational Sunday school teachers and ministers to teach children the popular Christian and social values of the time.  We can imagine children reading these stories in the 1890s, hunkered down with their families in the depths of winter, or sitting in Sunday school being read to by their teacher. The two stories we will look at transmit messages about the relationship between faith, material wealth, and personal success.

In the 1890s, this was a topic of great interest and concern in churches. Many Americans were becoming wealthier than ever, but others around them were destitute. The growing disparity between the haves and have-nots was troubling to a growing number of ministers, who began to wonder what the church should do about it. Ministers asked, "What would Jesus do about the plight of the working poor among us? Is the gospel of Jesus a plan of personal salvation only, or is it also a plan of social salvation that requires social reform?" Their misgivings eventually solidified as the Social Gospel movement.

The Social Gospel split Congregationalists into two camps. Advocates of the Social Gospel believed the plight of the working poor was primarily due to social injustices that could be rectified through reform and legislative action. Opponents of this view insisted that poverty was inevitable because of human sinfulness, and advocated personal repentance.

The two stories discussed here show the dominance of the latter argument in the 1890s. Even books for children pushed the view that societal ills should not be of concern to Christians.

The first story, "The Best Possible Christmas," addresses this question. It was written by Rev. Alexander Twombly for his youngest parishioners at Winthrop Church in Charlestown, Massachusetts, and published by the Congregational Sunday-School and Publishing Society.

The first vision is a Christmas without poverty.

"In the square there was a great jubilee of children…Boys and girls were dancing about a huge pile of books, toys, pen-knives, dolls, wax candles, and everything else, and as they helped themselves, they sang a song,—beginning, ‘Old Poverty is dead so we'll be fed, With muffins hot and good white bread.'"

But the vision of a plentiful Christmas quickly sours. "Everybody Pansy met looked cross." The old washerwoman to whom Patsy's family usually brings gifts on Christmas morning is lonely: since she has everything she needs and Pansy's family no longer has a reason to visit. Even wealthy people are worse off after the death of poverty. Pansy sees a man who is angry that his gift has been turned down.

"A great Christmas this is! No poor folks, no chance to enjoy sending them turkeys or sixpences! Well I don't want to and I won't. What's the good in doing good for other people anyway? They never thank you."

Pansy begs to leave the first vision, since it is not the best possible Christmas. In the second dream, sickness is banished. Everyone is healthy and flush, but this vision also troubles Pansy. As she observes,

"Everybody was saying, ‘Isn't it a happy day? No more sickness, no more pain!' But nobody seemed to think they ought to go to church to thank the Author of their great deliverance."

"Even Pansy, though a child, had found out that no Christmas can be the best possible unless the Savior puts into it and into our hearts, his own sympathy with suffering. [Christmas] might come with poverty, it may have sickness in it; but it is the best—when the Wonderful Being born in Bethlehem is born again in human hearts, to bless and save."

Without suffering, the story says, families no longer care for each other, everybody is selfish, and people have no use for God. Sickness and poverty are presented as necessary evils, part of the path toward individual salvation. This stands in sharp contrast to the Social Gospel perspective that much poverty and suffering can be remedied through social reform.

The second story is titled "The Sleigh Ride" and comes from another collection, also published by the Congregational Sunday-School and Publishing Society. This story connects personal piety and kindness to the achievement of financial success. The story begins as Margaret, "a little girl, a child of very poor but respectable parents," asks for a sleigh ride from Joel, "a strong, rough boy, who was not very regular in his attendance at school." Joel tends not to be very generous, and yet he concedes to give Margaret a ride.

"When she said to Joel, with a timid voice, won't you give me a ride on your sled? he was at first disposed to reply, No! what business have you to have a ride? Something seemed to close his mouth against the utterance of those words."

Joel decides to pull Margaret through the town on his sled, and feels the immediate reward of being kind to others.

"Joel said to himself, am I not a fool for giving this girl a ride? I shall never get anything for it. She is little better than a poorhouse girl. At this moment, Margaret came out with so happy an expression of countenance that Joel could not help feeling its influence; and, without acknowledging it to himself, he felt that he had already got something for his kindness to the poor girl."

But seeing Margaret's happiness is not enough for the story. "The Sleigh Ride" ends with a rich gentleman witnessing Joel's compassion for Margaret. He gives Joel a job, and eventually helps him go into business for himself. Through the kindness of a capitalist, Joel was given access to economic advancement.

This version of success and social advancement places the emphasis on random acts of kindness and the generosity of social superiors, rather than the social structures and circumstances that trapped Margaret's family in poverty and kept Joel out of school.

Churches and parents used children's stories to imparting society's values to children. These two stories show how the prevailing Gilded Age values of individual virtue and personal piety were woven into Christian stories for children. The emphasis of most, if not all, was on the development of Christian character. No thought was given to the Social Gospel concerns of societal sin or social reform. Instead, Christian stories for children taught that social problems such as poverty, suffering and injustices were inevitable, but society's ills were made more bearable through one's faith in a loving Savior, and He is all the world needs. While not denying the truth of those religious sentiments, proponents of the Social Gospel fought an uphill battle for social reform to alleviate suffering and establish justice for all so that God's will may be done on earth as it is in heaven.

Read these stories in the upcoming issue of the Bulletin, free to all members of the Congregational Library and Archives. Become a member to make sure you get a copy.

illustration from The sleigh-ride, and other stories (1872)