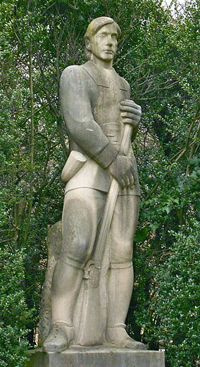 The debate on gun control that is now taking place in America makes me wonder about the laws the Puritan founders of Massachusetts enacted regarding guns and gun safety. Were restrictions on weapons really looser in the earliest days?

The Puritans were fully aware of the challenging environment in which they lived, so they embraced not only the right but also the necessity of bearing arms. The legislature voted on May 29, 1644, that "all inhabitants" (even including sailors) "are to have armes in their houses alwayes ready fixt for service."

But it turns out they were so serious about public safety they passed serious gun control legislation. These measures included:

No shooting guns for the fun of it after the night watch was in place:

Further, it is ordered, that if any pson shall shoote of any peece after the watch is sett, hee shall forfeiet 40s, or if the Court shall iudge him vnable, then to be whipped; the second fault to be punished by the Court as an offence of an higher nature. (April 12, 1631) [Massachusetts Records, I, 85]

It is ordered, that the capt & officers shall take especiall care to search all peeces that are brought into the ffeild for being charged, & that noe person whatsoeuer shall att any time charge any peece of service with bulletts or shott, other then for defence of their howses, or att comaund from the capt, vpon such penallty as the Court shall thinke meete to inflict. (July 3, 1632) [I, 98]

Weapon size and capacity to be regulated:

no pecces shalbe alowed for serviceable, in our trained bands, but such as are ether full musket boare, or basterd musket at the least, & that none should be under three foote 9 inches, nor any above foure foote 3 inches in length... (October 1, 1645) [II, 134-135]

When publicly procured guns were resold to citizens, an account to be submitted to the Auditor General:

Itt is ordered by this Courte, that ye surveyor gennerall shall hereby have power to sell all the countryes armes vnto any persons inhabiting within this collony, & to give an accompt of all such armes sould by him vnto the auditor gennerall. (October 18, 1645) [III, 52]

Heavier arms unavailable to citizens for any reason whatsoever:

[No] selling or alienating any of the ordinance, or the great artilliry, or any the appurtenances thereof, vpon any pretence whatsoeuer, without speciall order of the Generall Court. (May 22, 1650) [IV-1, 5]

No sale of gunpowder to anyone outside Massachusetts:

It is ordred, that whosoever shall transport any powdr out of ye iurisdiction without leave & licence first obtained from some two of our honored magistrates, shall forfeit for every such ofience wich shalbe so transporting;.. [II, 136]

And the Bay Colony Puritan government confiscated arms when circumstances seemed to require, as in the Wheelwright - Hutchinson scare in 1637. (November 21, 1637 - I, 212).

Yes, you could own a gun in Puritan Massachusetts, for hunting and defense. But restrictions applied, and penalties were heavy. Makes sense to me.